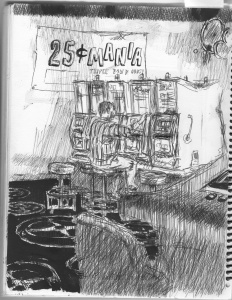 DOMINO is excited to announce that we will be publishing a collection of work by artist Ian Sundahl this November. THE SOCIAL DISCIPLINE READER will collect the best of Sundahl’s self published series Social Discipline, much of which is hard to find or out of print. Social Discipline has long been one of my favorite comics—Sundahl mixes beautiful figure drawing and tightly controlled storytelling over a template of pulp to express a personal attitude. So many cartoonists invoke older cartooning aesthetics but the end result is often cheap tribute or pastiche. Sundahl’s work, on the other hand, would be at home as a geniusely obscure men’s magazine insert or as contemporary naturalistic storytelling/pseudo-autobiography.

Sundahl’s figures are tough and stocky, but drawn with true passion. Touches of classic cartooning can be seen at every step, but for Sundahl it’s only a part of the puzzle. While Social Discipline has the look and design of a comic from the past, the sum of its parts makes it one of the most unique comics of recent years.

DOMINO is pleased to offer this preview of a few pages from THE SOCIAL DISCIPLINE READER. More info and previews will be posted as we get closer to the books release in November. 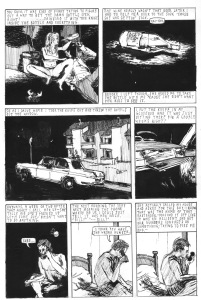