Victor Cayro and Keenan Keller were nice enough to let me see some preview pages of Cayro’s upcoming book Bittersweet Romance. I really can’t say enough about this book—it’ll be published in early 2013 by Drippy Bone, but just staring at these pages has made it my favorite book of 2012. I’m glad to be able to share these images here.

I was honored to be asked to do a pin-up for this comic, which appears alongside a drawing by the great Jesse McManus (I hear there’s also an incredible pinup by Matthew Thurber) 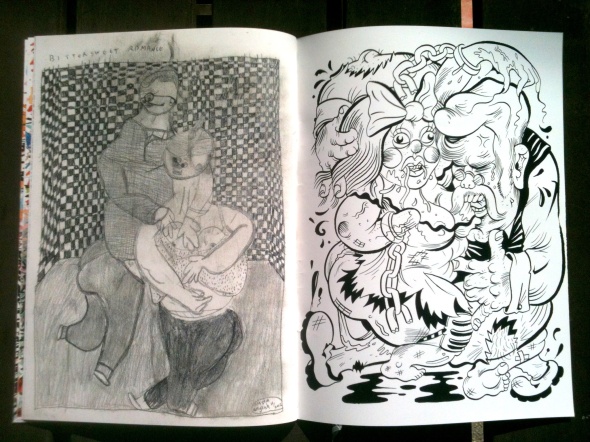 While the first thing that hits you with these pages is obviously the visual crush, what I’m most excited about is a tome of newly WRITTEN pages by Cayro. His drawings are so intense that I think the equally complicated/rich writing that every Victor Cayro comic displays gets lost in the shuffle. This promises to be a hulking work of art, and I’m so thrilled that it’s almost here. It’s hard to believe that a solo Cayro comic doesn’t exist yet, but as far as I can tell, every story so far has been in an anthology. Due congratulations to Drippy Bone for all the loving attention they put into this project—look at those endpapers!